I was rapidly gaining speed on my skis and losing control, I knew that it was only a matter of seconds before I was going to kiss the snow. My pulk, a plastic sledge weighting nearly as much as me carrying all my food, camping gear and clothes for twelve days was riding along side me down the mountain, just waiting for its moment to strike. Bam! It cut across in front of me taking out my feet, throwing me to the ground in a haze of white before rolling multiple times, dragging me head first, face in the snow, down the mountain until my spaying arms and legs eventually slowed us to a stop.

I pushed myself up onto my hands and lifted my burning, snow scratched face off the ground. I could see the contents of my pulk, freeze dried meals, tent poles and ropes messily disgorged in every direction around me. One of my supportive Norwegian guides, Hans-Petter had seen my dramatic fall and had raced towards me to check if I was ok. I looked up as he approached for sympathetic words. “Cookie?” he smiled broadly through his long, sun bleached beard and held out a spilt packet of snow covered cookies in his hands that he had picked up out of the snow a few meters away. At a moment I could have easily burst into tears that simple gesture instead made us burst into laughter. We ate a cold cookie each which contained more snow than biscuit and began gathering the contents of my pulk from all around us and continued on.

My pulk and I never became friends. It was heavy to pull up the hills and did whatever it wanted when going down hill. I frequently cursed it and found myself speaking to it as if it was an unruly child, “Don’t do that!” I’d scream at it, “Behave!” I’d command, “Stop!” I’d beg. It never listened. It was however, good for sitting on during lunch breaks.

My pulk was, however, getting lighter as the expedition when on. Skiing all day covering 20 hilly km or so I was eating a frightening amount of food everyday to fuel my physical efforts. I’d have rehydrated cereal for breakfast with dried fruit, a freeze dried curry or something else sloppy and yellow in colour, handfuls of nuts, dried beef bars and the much loved chocolate cookies for snacks followed by another large dinner and more snacks. I was constantly hungry! I was also emptying my fuel bottle due to having to spend around five hours every day melting snow over a stove to produce enough water to drink, rehydrate all my meals and fill my hot water bottle every night to keep me cosy in my sleeping bag.

We’d make camp each night after we’d covered the necessary distance skiing. There were two camp requirements; a flat surface to sleep on, and a stunning view. The latter was never hard to find. We set up our tents on glaciers, in valleys, alongside mountains and next to frozen fjords. Each evening the guides would make our camp more homely by digging a little hole, in a big hole as a toilet with a wind blocking snow brick wall. Going to the toilet in -20 and below is quick business as bare skin did not take long to become agonisingly cold.

If the conditions were good each evening we’d build somewhere to sit, eat and socialise in the snow, affectionately named the “curry house’. This was so called because we mostly sat there and ate our rehydrated curries whilst fantasising over fresh food and a glass of wine. Yes thats right, we comfortably sat outside in the snow chatting all evening in temperatures of -15 and below, something incomprehensible back in London at below plus 15 degrees. At the end of every long day I got into my sleeping bag, warmed my feet on my hot water bottle, covered eyes with a buff to block out the 24 hour daylight and slept soundly despite temperatures of – 25 outside.

On day three we spent a tiring, but awe-inspiring day summiting Mount Newtontroppen, the highest mountain in the Svalbard archipelago at a height of 1,713 meters. The steep slog to the top, thankfully without our pulks, was rewarded with endless views in every direction of snow covered peaks and blue skies. Russian Helge Buckland was the first person to ever climb the peak on August 4th 1900, 116 years before me. ‘What goes up must come down’ quoted Isaac Newton, the man whom the peak is named after. I’m not a great down hill skier, to make my descent even more challenging I’ve never skied down hill in such skinny skis and without my heel being locked into the ski before. The decent was very steep in parts, uneven and covered with patches of ice. There were many, many falls by everyone in the group, but I definitely fell the most! It was a heartening display of team work that we all supported each other, laughed together and patiently waited for one an other.

Our attempt to climb the second highest mountain on Svalbard, Perritroppen, a mere 1 meter shorter than Newtontroppen, was abandoned due to bad weather. On the day of our attempt it was a complete white out which meant that we couldn’t see more than a few meters in any direction or how steep the gradient was, we couldn’t even ski in a straight line without a reference.

The arctic weather gods gifted us every kind of weather on our 12 day trip. We had beautifully sunny days, dramatic cloud formations and moody lightning, complete white outs and winds so strong burning my face was burnt. My snot froze to my face many times and my plait turned a solid white like a true snow queen’s when not tucked into my jacket.

Of course I wanted to see a wild Polar bear, the king of this frozen kingdom, but not whilst on expedition. Human polar bear attacks are very rare but the threat is real. When crossing the frozen fjords we regularly stopped and checked with the binoculars that there were no bears ahead. When describing to friends how to spot a polar bear from a distance I say this ‘A huge, moving, yellow blob with a black nose and perfect gangsta shoulder roll’. Our two guides were well trained and both carried a rifle and warning flares for potential self defence, in accordance with the laws in Svalbard. At night a trip wire encircled our camp that would set off deterring flares and loud noise if triggered by an incoming bear to warn us of a visitor. We even took shifts of ‘polar bear watch’ throughout a couple of nights when we camped near the ice where the risk of an uninvited guest was at its greatest. Such was the threat.

We reached end of our expedition and final target at the abandoned Russian mining settlement of Pyramidan, which sits on the 78 parallel. Pyramidan was abandoned in 1998 and has been ranked number 7 on National Geographic’s list of the words spookiest ghost towns.

Today, 8 Russians live there to maintain a Russian foothold on the archipelago and occasionally host slightly morbid tourist groups such as ourselves. The town is a depressing, but fascinating insight into the arctic Soviet past. Life was good there once. We were shown the drained swimming pool, the theatre strewn with broken old instruments, the basketball court with the original, now mostly deflated balls and the retro weights room with amusing motivational posters. The library was full of old, yellowed, magazines from the 1980’s and the cinema floor covered with reels of children’s cartoons. The once happy place now looks very sad as the buildings crumble and the paint continues to peel. Wood, rubbish and metal from the decaying mine and infrastructure litter the snowy landscape and the coal stains the snowy ground black. The worlds most northerly statue of Lenin over looks Pyramidan’s demise.

We spent our last night camping in Pyramidan. A Polar bear encounter here was a much greater possibly due to its location on the edge of the frozen fjord as this is where the Polar bears hunt for seals. This meant that as well as all the usual precautions, each expedition member also had to do an allocated 1 hour of “Polar bear watch” to keep a lookout throughout the night. My hour was 3-4am. As well as scanning the horizon for a moving yellow blob, I spent the hour in the slightly dim light imprinting in my mind the view of the magnificent craggy, sky blue glacier in front of me and having this view all to myself.

That hour on watch also gave me the opportunity to reflect upon my experience and be humbled by the privilege of being able to immerse myself in one of the most remote, beautiful places on earth that so few get the opportunity to see other than on a David Attenborough documentary. The beauty, silence and size of the empty arctic landscape humbled me. Something so beautiful and perfect cannot hide its fragility but it comforted mine. No one saw any polar bears that night or at any other time, only seals and the Svalbard reindeer, a species unique to Svalbard that are much shorter, fatter and hairier than what you usually expect a reindeer to look like. We only ever saw Polar bear paw prints in the snow.

I didn’t want the expedition to end but was pleased to take a shower after 12 days of skiing and camping without a wash and only one change of clothes. I took a long look at myself in the mirror before I jumped under the warm water, my face was sun burnt, skin dried to a crisp by the winds, my lips cracked and my hair was glued to my head with grease after 12 days of wearing a hat day and night for warmth. Before I saw any of this, however, I saw a confident, beaming smile and heart full of happiness from my achievement and my time spent with living with nature in the arctic. That is what adventure is all about. 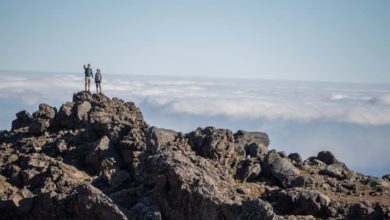 Whakapapa – Mt Ruapehu A mountain of fun open all year round 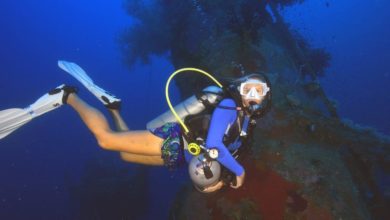 Images from Dive Munda in the Solomon Islands 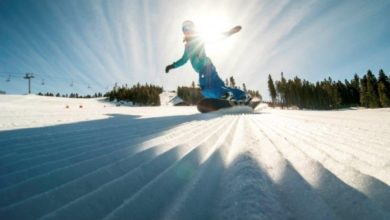