Mount Ruapehu is an active snow-covered volcano that rises 2800 metres out of the centre of New Zealand’s North Island. With ocean for thousands of kms on either side, Mt Ruapehu attracts the elements from every direction. This gives the mountain its reputation as a wild an expansive place with unique and challenging terrain. 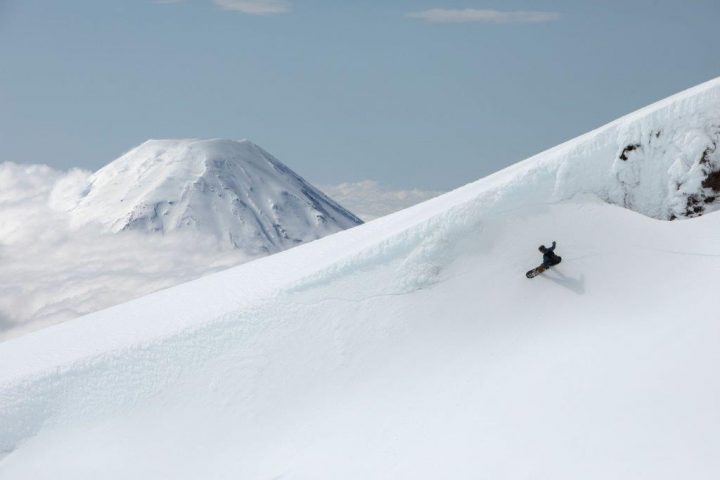 With Diaries Downunder having never had the opportunity to film in the North Island before, we jumped on the invite to get up to experience the great volcano and document it in all its glory. In fact, all of the kiwis in our crew on this trip had learned to snowboard at Mt Ruapehu and the mountain holds a special place in all of our minds for this reason. So we gathered up our mountain of camera bags, and loaded an Air NZ flight to Auckland and made the road trip to Mt Ruapehu (via some competitive luge battles in Rotorua). Getting back to enjoy the splendors of a mountain that holds such nostalgic memories made the prospect of getting conditions good all the more exciting – and we weren’t disappointed. Whakapapa is huge. To get to the highest lift you need to catch 4 lifts UP. This is different to your traditional South Island Ski experience and a top to bottom run can only be described as a leg-burner. The terrain is varied and vast with the elements being responsible for the natural Skate park like features scattered cross its slopes. Cornices, gullies and cliffs are all part of the Whakapapa experience and the search is all part of the fun. Whakapapa regular and New Zealand snowboarding legend Rob Mitchell was our guide for Whakapapa and he certainly had a good first spot in mind. Half an hour after arriving we were all setting up to film our first location –  a wind-swept cornice with The Pinnacles poised behind us and a beautiful steep landing. This was the best possible way to start our trip and with a couple of good ones under our belts were off to begin searching out the next zone. 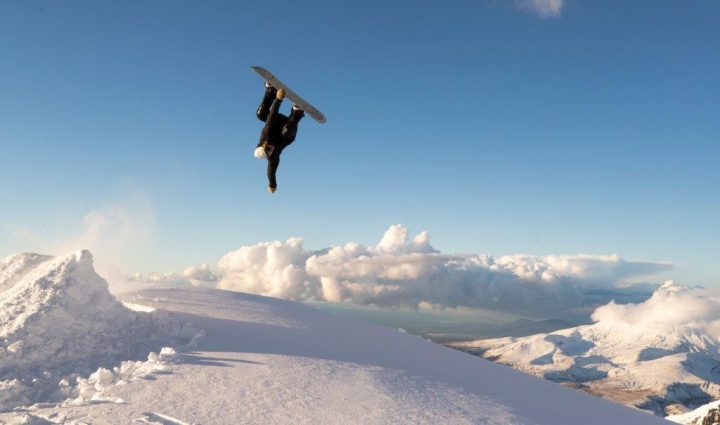 Whakapapa isn’t only high, it is also wide and this leads to a very desirable problem – too many options! After settling on a spot that we were all reminiscent about learning our first grabs on we were shaping up a lip and launching ourselves over the ‘Waterfall hip’. It was a great and exhausting way to finish an full on day of filming and yarning about the ‘glory days’ of being grommets having the best time ripping around Whakapapa. Every aspect was soft and it was your classic spring Whakapapa day – saturated from spring slushy snow and a huge smile on our faces as the sun set as we cruised back down the Bruce Road.

Our next good day at Whakapapa was what some locals were referring to as the best it has been in years. Once again the mountain was soft – this time it was soft from being covered in powder rather than a slush and damn was it good!!

The Pinnacles were first on the list and being untouched with fresh snow, the steep pitch made for some world-class powder turns. We knew the clock was ticking and a powder day like this needs every minute squeezed out of it so we fuelled up and continued  west – stopping only once we cast our eyes an epic cornice that we spotted on the horizon from the Knoll Ridge T-Bar. WHAT A SPOT – it was WAY bigger than anticipated but we gathered to courage to give a boost. The landing was bumpy, fast and had a crazy compression but we knew we couldn’t pass up the chance to hit it. The speed out of the bottom was fast and you basically couldn’t stop for 100 metres but once over the initial terror of that it was great and the thing that made all the more remarkable was that you could lap it from the T-Bar – No hiking required. Because waking at 5am and riding the pinnacles and launching ourselves off the cornice hadn’t quite yet destroyed us, we decided to stay for the sunset at the top of the resort. We built a jump and has fun getting upside down as the sun set over the Tongariro National Park. The expanse of land and mountains in front of us was like nowhere else in the world – very unique volcanic terrain and a rugged, desert like look to the landscape kept us in awe right until the sun dipped below the horizon. It was unbelievable! You probably don’t need to use your imagination too much to envisage how that ride down was from the very top of the mountain – to the base, with camera bags, tripods and a whole plethora of gear after hiking like mad to get the last of the sunset. It was exhausting in the best possible way – the way that you and your friends yarn about forever and have the footage the story to prove it was worth every effort. 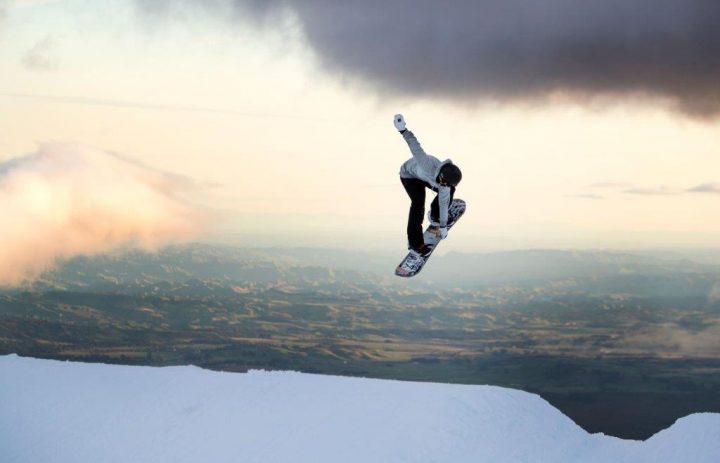 Turoa is wild. It really is a completely different mountain to Whakapapa.  Glaciers, ice formations and gullies that expand far beyond the line of sight treat the explorer and we went far and wide to make the most of the terrain. The great thing about Turoa is how playful the terrain is. There are cornices, windlips and cut-outs all the way across the mountain, as well as some cliffs that definitely get the heart racing. And on top of that they have a terrain park that is handled by a dedicated crew!

We all made sure we got some really some nice windlip powder turns before moving onto some of the bigger cornice spots. We had been told about the cornice section at Turoa before and having seen it in magazines before the crew was really stoked to finally get out that way. Soon after, we found ourselves back in the terrain park to finish out the day and watch the sunset between broken clouds. Turoa is the North Island’s main terrain park and it has a large variety of rails and some decent sized jumps that the crew took no time to start getting into. Once the sun dipped below the west coast clouds surrounding Mount Taranaki, we decided to make our way back to base to celebrate a week of many firsts, many triumphs and many a good memory from both sides of the mighty volcano. 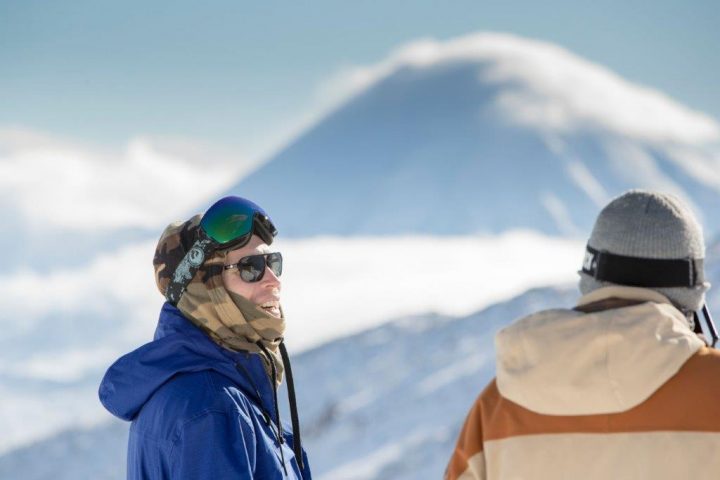 The size of the mountain is something that just keeps bringing itself to your attention when at Mount Ruapehu. You really do feel small in a huge environment covered with a million fun and challenging options – and with this comes many opportunities for new adventures daily. It definitely pays to have a local or a guide with you in the backcountry as getting lost in the mountains can be devastating. The weather can turn extremely quickly up there and like all-mountain adventures – preparation, knowledge and asking and about reviewing conditions is absolutely KEY to getting back safely. Mount Ruapehu is a spot that leaves you with a million memories and has been the place that many of New Zealand’s greatest snowboarders have cut their teeth. It is just such a different experience to the South Island and although Mt Ruapehu caters to more skiers in a single day than that of any other resort in New Zealand, it still holds an intrepid feel to it – that is what it makes that extra bit special. And as those who know the mountain well love to say – ‘On its day, it sure is hard to beat’. 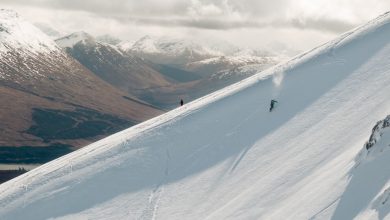 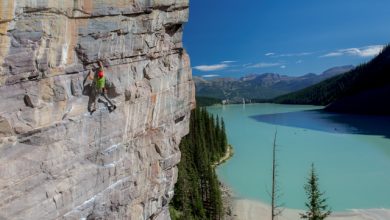 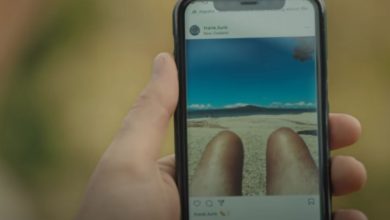 Travelling Under the Social Influence – could become a Kiwi Classic