Three decades ago, Chernobyl was the site of one of the biggest nuclear disasters in history. Today, it is becoming a destination for adventurers and explorers.

The tension between those two facts is what struck me when I first visited the Chernobyl Exclusion Zone, the 30-km radius around the Chernobyl power plant that was evacuated in the wake of the explosion. At the time I made my trip, in 2017, I had no intention of creating a film about my experience. However, what I found in the zone–a burgeoning culture of adventure tourism at the spot of a deadly historical event–captivated me. And it eventually became the basis of my documentary, Stalking Chernobyl: Exploration After Apocalypse. Some thirty years after the nuclear disaster, forests and wildlife have taken over again in places that humans abandoned. And people, too, have started to return. Some are thrill-seekers. Some are artists. Some are scientists. I wanted to document what they are finding in the Exclusion Zone and their fascination with the post-apocalyptic. Of course, hanging over all this are critical environmental and human rights concerns, related to humanity’s appetite for risk and propensity for self-destruction. Under the surface of a film about adventure travel, I wanted to probe these issues. Is It Worth the Risk?

Since the film’s premiere in March, I have hosted a number of virtual discussions about Stalking Chernobyl. One of the most common questions that I’ve heard during these events is, “Is the Exclusion Zone really safe?” It’s a straightforward inquiry, but the answer varies greatly depending on who you ask. Different experts have wildly different views.

“It is the luck of the draw to an extent,” says Cindy Folkers, a radiation and health specialist at Beyond Nuclear, an organization that aims to educate and activate the public about the connections between nuclear power and nuclear weapons and the need to abandon both to safeguard our future. “Are you careful with your clothing and aware of any particles that may attach themselves? Are you breathing in dust? Are you there during a fire? Do you have the proper monitoring equipment? Are you eating food there? There are many protocols that you have to follow to maintain safety and even then you may not be able to control all of the pathways contamination will use to travel to your body.” Folkers warns about the long-term consequences of radiation exposure, such as birth defects, and argues that the invisibility of the danger makes the adventure all the more thrilling—and dangerous. “If radiation were coloured red, people could understand the danger they are walking into. But because we only have inadequate equipment to measure, we don’t grasp the full danger…. So you combine the fascination of a once-vibrant place that is now a hollowed-out abandoned ghost town, with the false sense of security offered by inadequate measuring equipment, and you end up with a lot of untrained people putting themselves, and others they may contact outside the zone, at risk. This is bound to happen when the risk is virtually invisible.”

But for the stalkers who explore the Zone, that risk is worth taking. For its part, the government has slowly begun loosening restrictions. In 2011, more than two decades years after the explosion, the Ukrainian government-sanctioned official tours to the Exclusion Zone, as well as to Pripyat, a village 3km away from the Chernobyl Nuclear Power Plant that was evacuated after the explosion. Officials, however, continue to frown upon those who do not bother with licenses and assert their right to explore freely. The Ethics of “Dark Tourism”

Beyond raising questions about the safety of visiting the Chernobyl Exclusion Zone, the film touches on a debate around what is called “dark tourism.” Simply put, the question is, “Should we turn the sites of deadly disasters into destinations for international pilgrimage?”

In 2019, Washington Post reporter Hannah Sampson outlined the issue. “Dark tourism refers to visiting places where some of the darkest events of human history have unfolded,” she wrote. “That can include genocide, assassination, incarceration, ethnic cleansing, war or disaster — either natural or accidental. Some might associate the idea with ghost stories and scares, but those who study the practice say it’s unrelated to fear or supernatural elements.” Besides Chernobyl, other sites of dark tourism include Auschwitz, Gettysburg, the site of the Kennedy assassination, and the 9/11 Memorial in New York.

“We’ve just got this cultural fascination with the darker side of history; most history is dark,” Philip Stone, executive director of the Institute for Dark Tourism Research at the University of Central Lancashire, told the Post. “I think when we go to these places, we see not strangers, but often we see ourselves and perhaps what we might do in those circumstances.”

But for stalkers such as Oleg Shalashov, who served as the production coordinator for my documentary, the site is less about remembrance of disaster and more about what the place has become. “For me, the unique thing in the Chernobyl Zone is that no one has tried to stop time from passing there—and with time, nature takes back its territory,” he says. “It is a place where you can behold how nature recovers from radioactive pollution. ‘Let’s leave death for dead’ and watch an example of what will happen after us.”

In my filmmaking, I try to let people express their own views, even when they vary widely. As I walked in the Chernobyl Exclusion Zone, with abandoned smokestacks and radio towers looming on the horizon, it seemed as if the ghosts of the tragedy hung in the air. I asked the adventurers with me if they felt them too. My hope is that viewers will watch the film and decide for themselves about the answers. — Iara Lee is an activist, filmmaker, and founder/director of the Cultures of Resistance Network, an organization that promotes global solidarity and supports agitators, educators, and artists around the world. For a limited time, Stalking Chernobyl is streaming for free online and can be viewed at culturesofresistancefilms.com/Stalking-Chernobyl. 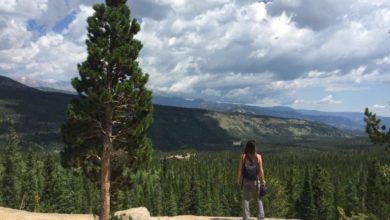