Trying to squeeze a right-angled block of rock hard enough to hold all of your weight is no trivial task. It demands a Herculean effort in an absurd position – imagine trying to hold yourself on to the adjacent sides of a refrigerator using only your hands.

Now try it while clinging to a massive pillar of rock rising straight out of the ocean as the wind invites you to relent to her fury and, far below, waves crash into the base with a force usually reserved for wiping out entire armies.

The Totem Pole, in the southeast corner of Tasmania, is one of the most epic settings for a rock climb. Roughly four metres wide on each side, this famous tower stands defiantly amid watery depths that swirl in a frenzy. It is inhospitable, yet mesmerising. Somehow, over the course of millennia, the pillars of dolerite surrounding the Totem Pole all collapsed. All except for this remarkable, single tower. The neighbouring cliff, called The Candlestick, is a seamless collection of similar-looking pillars, giving the impression of what the whole cliff line used to look like until, somehow, everything around the Totem Pole crumbled into the Tasman Sea.

“Imagine a matchstick,” said first ascensionist John Ewbank. “Scale it up a hundred times until it is 70 metres high and four metres square. Stand it alone in the sea, a single, freestanding dolerite column so fragile to the eye one dares to hardly breathe.”

Very little information is known about the first ascent, in 1968. As was the norm for difficult climbs at the time, it was aid-climbed, meaning Ewbank and partner Allan Keller placed climbing gear inside the rock’s cracks and crevices and used them to haul themselves up. A storm brewed as they topped out, and they ended up spending the night on top, both later proclaiming that they could feel the pole swaying in the night.

In 1998, British hard-man Paul Pritchard sought a free ascent, aiming to climb it without the use of any aid. As he abseiled down, a boulder the size of a microwave came loose and smashed through his skull, paralysing him. His partner at the time, Celia Bull, had to haul him to a ledge and run eight kilometres just to raise the alarm. Eventually, Pritchard was winched via helicopter from the Tote, dropped into a waiting boat, and rushed to hospital. He survived, but with limited movement on his right side.

Pritchard returned in 2016 and climbed to the top of the Totem Pole. Leading him up on this cathartic ascent was his mate Steve Monks, who was the first to free-climb the Totem Pole in 1995 with climbing partner Simon Mentz. Their route became a mega-classic but, with a difficulty grade of 25, not for the scrawny. I was far from strong enough to try it the first time I heard about the Totem Pole, but tales of awesome tremendousness from friends who had scaled it planted a seed.

This past summer was my first in Australia for years, and all climbing goals were a distant second to the Tote. It’s a 90-minute hike to the end of Cape Huay on the Tasman Peninsula before your first glimpse of the pole – skinny, tall, hopelessly alone. It defies belief, really, that this frail, Kate Moss-proportioned rock is still standing amid unsavoury elements.

Even if you have the cheek to attempt the climb, just getting to the base is an ordeal. The instructions are straight-forward: abseil down, swing out to the Tote while still on the rope, and clip yourself into a bolted anchor. But it’s a stomach-churning prospect to lower yourself towards a watery vortex, let alone hurl yourself from one cliff face to the next.

Abseiling down felt like being swallowed by a giant washing machine. A few metres above the sea, I stepped onto a small rock alcove directly opposite the base of the Tote. I turned to face the beast, some seven metres away, separated by a watery chasm. Every now and then, a lick of water would lash out from the sea and take a swipe. The winds, so innocuous at the top, seemed not only much stronger here, but a touch calamitous.

Summoning something akin to courage, I turned my body sideways, grabbed my rope for luck, and pushed off with my feet. Pathetic. The half-hearted effort saw me gently sway towards the Tote and return placidly to the alcove. My next attempt was more committed, but my arc was too low to reach the bolts, and I swung violently back to the opposite cliff.

If anyone above was yelling encouragement, I was oblivious, my ears hearing only the seething of the sea. I launched again and again until … success! I clipped myself into one of the bolts and was soon secure. My climbing partner Chris, a tall man with unrivalled chin structure, abseiled down to join me, and we prepared for battle.

But the first section was sopping wet, forcing Chris to aid-climb the first few metres before free-climbing, finessing his way higher with grace and composure. As he neared the halfway ledge, a massive wave surged forward and saturated me as I belayed.

Chris soon put me on belay, and I pulled onto the rock. A series of side-pulls weaved a path higher to a small stance. From there, the holds narrowed to allow only finger-tips. Focus. Breathe. A high foot. Another finger-tip edge. A short sequence of hard moves, and then a hold that swallowed my whole hand. Glorious!

What was even more glorious was the belay platform. Somehow, a third of the way up, a giant ledge had manifested, large enough for a slumber party.

Now it was my lead, and I gazed up at the intimidating final pitch – a 40m-long saga up the arete. This was a grade that I rarely onsight – meaning to climb cleanly on the first attempt – and I couldn’t help but notice that an airy space had materialised in my gut.

The first move was bold – a hard, off-balance pull off the platform without the security of a safety bolt. The rock steepened above, with holds either side of the arete. At one point, I glanced down to the turbulent waters below. What a position!

A few bolts higher, a tentative traverse to the left spat me off. I pulled back on, but the next move, a long, hard pull from small nubbins in the rock, sent me flying again. About halfway up, I came to the real crux of the pitch. Holds vanished as I moved to the arete, and soon I was compressing the right-angled corner, clinging to the refrigerator corner, pushing my skin against the rock wherever possible to maximise friction. I slapped my right hand up higher on flat, smooth rock, but couldn’t hang on through sheer force of will alone. More airtime.

After failing at the crux a few times, I asked Chris to lower me back to the ledge so I could offer him the lead. If successful, he could onsight the whole climb.

Now belaying, I watched Chris make short work of the beginning, span the traverse with his enormous wingspan, and then push through the crux on the arete. Such a class act. Towards the top, he angled left to an overhang, and then back right to a stance near the top, announcing his glee with a cry of delight.

He put me on belay and I started following. My arms were tired, but I remembered the moves I had faltered on previously. It wasn’t until the refrigerator move that I hesitated, slapped my hand up the arete again, and then pinged off. But after dangling on the rope, I managed to paste my foot higher on the rock and step up to a razor’s edge for my fingertips. Technical, balancy moves awaited me higher.

The movement near the top was spectacular: delicate climbing in an arresting position. Soon I joined Chris, and then led the final 5m block to reach the summit. I raised my arms in sheer joy and, to my merry surprise, a huge roar came from over my left shoulder. I turned to see a crowd of cheering onlookers at a viewing platform at the top of the hiking track.

There was one more chapter of the adventure still before us. Getting back to the mainland requires a second rope and some trickery to set up a Tyrolean Traverse. When set up, a taut rope leads from the top of the Tote to a block of rock on the mainland, about 12 metres away. In the final test of your ability to shun self-preservation instincts, you clip yourself to the rope via your harness and literally step off the top of the Tote.

It is much easier to say than do, much like forcing yourself to step off a bungy platform. When I finally committed, my heart beat surged as my body plunged to the middle of the sagging rope, 70m above the sea. From there, I gathered my composure and pulled myself to the other side. When Chris joined me, we weren’t quite ready for our day to end. We found a sunny spot and just sat, staring at the wild coastline, basking in the moment.

Sometimes you climb beautiful structures, but the climb itself is sub-par. Other times you climb grand routes, but the setting is underwhelming. But the Totem Pole delivers both: a unique feature or unrivalled beauty and a climb that is simply sensational. The expectations were impossibly high in the first place, but the experience matched the reputation. A sublime adventure of the highest order. 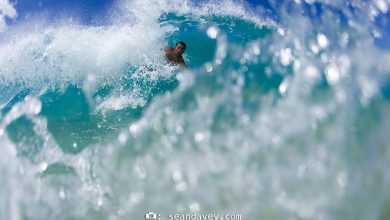 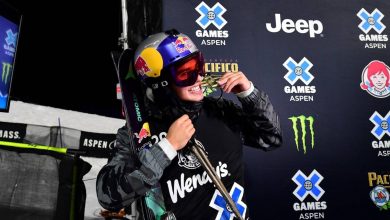 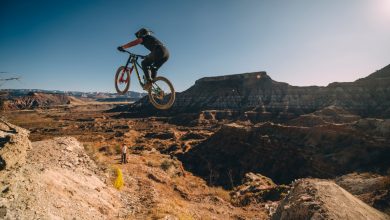