Jase’s head nods up and down in the way you do when you fall asleep on a train. He can’t possibly be sleeping, I think to myself. It is deafeningly noisy, the place smells like diesel and we are being thrown around something chronic. He is sleeping! That’s impressive. We are in the belly of a snowcat deep in the Japanese mountains between Niseko and Sapporo in Hokkaido. We are at the end of a very long, exhausting yet thrilling day. We have been Cat Skiing.

I found out only a few weeks before I hopped on a plane, leaving the scorching 30 plus degree summer in Wanaka, that I was going on a trip to Japan. Super exited at the thought of doing turns in deep Japanese powder, eating yakitori, bathing in Japanese Onsen baths, I was not too upset to be leaving my first summer in 9 years. Knowing that I was headed to Hokkaido, the powder capital of the world, I got in touch with people I knew doing a season in those parts. There is a strong kiwi contingency infiltrated in Japan. Jason Woolf had been hanging out in Niseko for most of the winter, giving himself time for some turns after many years of hard work in the ski industry. Cam McKay was another New Zealander, he was working for as a guide for a Cat Skiing company in Niseko.

Soon I had a plan. Cat skiing. Shooting photos and skiing pow away from all the other powder hounds in a place where it doesn’t stop snowing. Surely this is what dreams are made of? Determined to get the trip happening, emails were flung backwards and forwards making the arrangements. The last confirmation came through at 11pm the night before, instructing us that we were scheduled to leave Niseko Hirafu at 7.30am the next morning. In a late-night flurry of organising snowshoes, skins, transceivers and all that backcountry necessities it was well after the stroke of midnight before I saw my pillow.  We were warned by Cam that it was going to be a big day. Cripes, I was nervous at the thought, after all I had my summer legs on! It had not stopped snowing since we arrived and the thought of wading through meters of fresh snow with my heavy camera bag, chasing two top skiers made me a little anxious.

Waking up before my alarm I peeked out through the curtains thinking maybe, just maybe it had stopped snowing and we would have some blue skies. My bleary eyes were met by thousands of fat flakes finding their way slowly to their friends below. A hearty breakfast at the very comfortable Red Ski Lodge and I felt ready for anything. An old Land Rover pulling a sled rocked up outside the door. I meet our guide Cam and the owner of the company Nick. Next stop, Seven11 for some well-needed food for the day. Not too sure what Japanese snacks to stash in my camera bag for the day, I bypassed the dried small fish, unidentifiable food items and settled with a few rice balls and a pre-made chocolate sandwich. Only in Japan would you find pre-made Nutella sandwiches with no crusts!!  This should suffice… Without a clue on where we were going nervous anticipation built in my stomach as I rode in the back of the Land Rover with Jase I had no idea what to expect. Before long we pulled up at a small brown hut, only just visible through the large walls of snow surrounding it. I clambered out over all our gear, with a yawn and a stretch I opened my bleary eyes and spotted a small orange cat poking its face out of the snow that covered it. Nick was soon lovingly brushing the machine dry and I could see our transport in its true light. We strapped our skis to the side and filled the back with our bags. I rode up front with Cam as he told us it will be about 45 mins till we reach our destination. He apologised in advance for how noisy and smelly the ride would be. And he wasn’t joking…

The cat spluttered into life, coughing up a large amount of black smoke. Noise filled my ears and we were on the ‘road’. We ploughed through a meter of fresh snow, along a sort of track. Cam told me that this is a summer road. The journey was very bumpy as we trundled along. I screamed across the noise at Cam trying to find out about where we were headed. I couldn’t hear much so gave up….  The land was like a fairy tale; pinky silver birch trees covered the mountains, with huge mushrooms of snow riddled through their branches. There is no form of human life, and I felt like we were the only people in the world when we pulled to a stop. 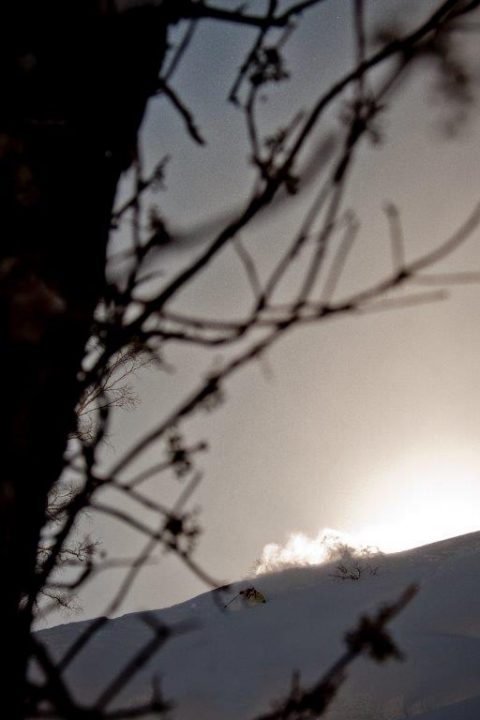 ‘Here we are.’ Cam announced ‘Now, if anything happens… its just like driving a car, start here, steer here, accelerator here..’  I looked at the two leavers for a steering wheel and a dashboard covered in Japanese Kanji script.  Baffled, hmm wonder what type of cars Cam drives. Cats obviously… and what does he mean by if anything happens!?  Lets play safe I thought.

Gear is unloaded from the truck and ski boots went on. As we geared up, checking transceivers, batteries, radios the clouds began to break. Could this be for real? Before long, a pocket of blue sky illuminated the terrain we have come to ski and reveals a winter wonderland. Our eyes are met by massive areas of untracked pow, trees, pillows. It looks like heaven. We are so excited to start shooting the boys find a pillow line directly below where we are stood. Taking advantage of this glimpse of light, not knowing how long it will last we strive to get as much done as possible.

The light stays with us and I spot some epic tree runs and features on the opposite ridge. The boys agree to skin up to the top and get across to the other side, while I hang out, as I want to shoot across at the face. All the time watching them slog through the snow I was praying that the clouds would stay away as it could close in any moment. Disappearing out of sight, I waited for what felt like a lifetime for the boys to reach the top. Eventually, the radio crackled to life saying they were nearly ready to drop. Instructing Jase which way to ski, I was so happy the sun was still out. He had a wide-open tree run, with not one track, and a meter of fresh snow in front of him. ‘Lucky bugger’ I thought… oh the joys of being a photog and just getting to watch through a viewfinder!  Soon he was skiing the line flawlessly, savouring every turn. Gosh it looked like fun. Cam dropped next and skied through the birch trees to the bottom of the valley. On the hike round, I couldn’t believe how lucky we were. The sun was shining, which never happens in Japan, there was fresh snow, and nobody but us here to enjoy it. After I had slogged to the top, cursing how heavy my camera bag was, but remembering how it was this that brought me here, I was able to put my skis on and enjoy my first and only turns of that day. The boys watched as I skied the Japanese powder towards them with the widest grin on my face. Damn it was good! It made the gruelling walk up worth every minute. I love the feeling of working for your turns; it makes each moment so worthwhile…

We hiked back up to a feature that Cam had had his eye on for the past three years, but never had the time while guiding to hit it up… he was determined that today would be the day he could drop this 25ft cliff.  As soon as we got back up our luck changed and the skies closed in around us. With a little bit of disappointment that our window was apparently over, the boys played with some smaller pillows and drops around the big cliff. With little light and flat landings not much was on. As we made a decision to move on the clouds gave us the break we needed and before I could say ‘Konichiwa’, Cam was stood at the top of his cliff.

I took a moment to find the right spot to shoot, knowing I had to do it quickly or we would lose the light. Moments later call that I was ready, focused in on the point where Cam would be jumping, he soared through the air in perfect formation. The landing was not ideal, being slightly flatter than ideal, but the hard as nails kiwi from Cromwell, sucked up the landing and rode away. Stoked to have that in the bag we made the decision to head over to the shady side, where the snow would be lighter and the light licked across the snow, leaving beautiful shadows. After milking a few more shots in the low afternoon light our tired legs found themselves to be pretty spent. On debating whether to set up a few last shots, I looked at my watch to see in amazement that it was 4pm. The time it takes to set up each photo had made the day seem so short. A healthy decision was made by the group that it was time to call it a day and we could be satisfied in the knowledge that we had worked super hard to get the shots. It took a lot of persuasions to get my tired legs to make the last few steps over the ridge to the orange cat waiting patiently for us in the deep snow. We secured our skis to the side of the cat and were soon on our way. I looked back out of the window at the bowl that we had skied, now scarred with our tracks, soon to be filled in by the oncoming snow for someone else to come and enjoy as we had. It was time to head back to the road, the town and other people, and most importantly the Onsen; Japanese natural hot spring public baths, a must for aching muscles. No-one can talk, we are all shattered from working so hard, so we just travel along with the noise of the cat purring along the bumpy track, reflecting on the days magic. I notice that Jase’s head is nodding backwards and forwards. He is asleep. I can understand how he is asleep after a day like today; the wee man had worked hard…

words and images by Camilla Stoddart 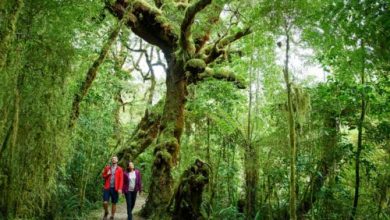 Off The Beaten Track 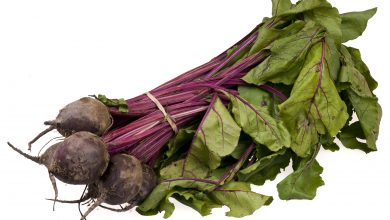 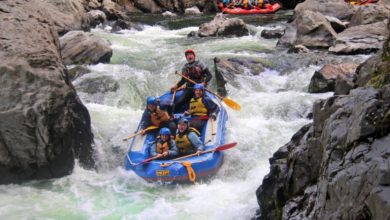 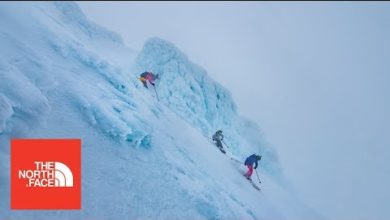