Is it stable? Will footing hold? Is fatal error a footstep away?

Rubber legs and heaving chest encourage the crashing waves of self doubt. It’s only fatigue playing tricks, but after a climb of 1500 meters it is the final push that feels impossible.

Every ounce of experience and training is required. Deep, dragging inhalation quiets the roaring inside each ear. The route is sound, the summit near. Plant, and step.

“They don’t call it a frontier for nothing guys.” Jared is studying a regional topo-map, pointing out the possible routes of ascent. He’s an AK local who doesn’t muck about when it comes to mountains. His words air aloud what the group had been silently thinking.

Boasting seventeen of the highest peaks in North America while ranging 1.5 million square kilometers, Alaska is by far the U.S. nation’s largest state—twice the size of Texas—and a potentially lethal box on the bucket list.

Steel-eyed armies of aspiring powder-pirates swarm Alaska’s commercial ski slopes from mid-September until late April. But for some that is only the beginning. Beyond that winter window, an especially brazen few tour to make real those turns otherwise relegated to imagination. Motivations include the lure of AK’s enormous ski acreage. Or some sense of personal conquest. But more, what drives is the knowledge that the Great Land’s snow panoply is really bound only by the limits of willpower. 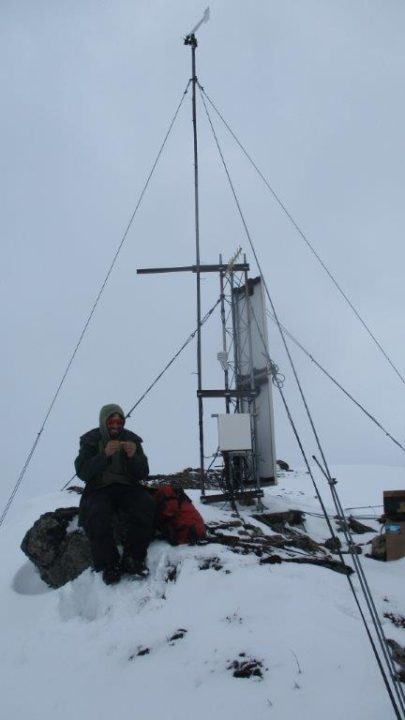 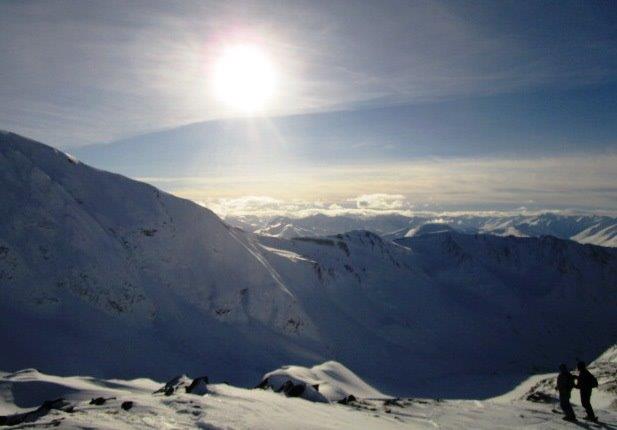 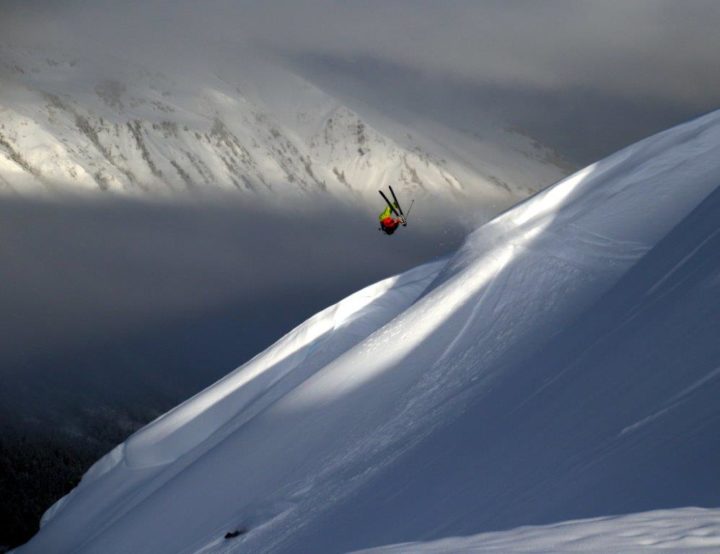 Enter Chugach National Forest; a sprawling, gulf-shored wildlands considered among the top-three largest forests in the United States of America. Its mountainous ramparts, 30% percent of which is ice-locked, span an area 400 kilometers long by nearly 100 wide, rocketing from sea level to Mount Marcus Baker’s 4,000 meters in a mere 16 kilometers while bristling fourteen additional peaks surpassing 2,400 meters along the ascent.

The wild-at-heart endearingly refers to the raw expanse as “Alaska’s backyard.” And dancing visions of horizon-spanning, chalk white spines drive the schemes of snow seekers specifically.

“It’s worth it,” says Mikey, a co-companion on the up-coming trip and equally schooled in the demands of high-altitude endeavors.

“Scoring the right day in the Chugach,” Mikey says, “could be the ski day of a lifetime.”

This team has been carving these slopes for years. And optimism is high to reach about the target zone.

Within the Chugach’s snow-swirled rabbit hole winds Turnagain Pass. The iconic sector is reachable within the hour from transit hub, Anchorage via Seward Highway. The largest commercial ski in Alaska, Alyeska Resort roosts 20 white-knuckle driving minutes distant. And the plug into Alaska’s roadways equates to convenient access. Thanks to its sea-level roots and 1,500 meter summits Turnagain is a near irresistible ski tour proving ground.

In Alaska the term, off-piste ranges in meaning. Quirkily named zones, Eddie’s or Tin Can are favored as starter-level missions achievable within a day. While farther afield taller seams beckon with the lure of increased altitude-to-risk ratios. And to imagine itself self immersed in the near-arctic backcountry rightly spurs the spirit to soar and nerves to tingle. But there’s a hell of a lot to be done before the skiing starts.

Preparation, as it must, is the first box to tick. And it begins at the planning stage.

It is companions that the tone and, heaven forbid, come to the rescue. So a manageably numbered, knowledgeable crew gets the proverbial snowball rolling. For obvious reasons, going solo is ill-advised, but so too is joining a disorganized horde.

Packs are checked, sorted then checked again. There will be no turning back for missing gear, and caught short of supplies could mean ‘abort mission,’ or worse.

Naturally, ‘gear’ implies a dizzying array of field items, all of which are handy to carry. But the must-haves are the trusty tri-fecta: avalanche transceiver, probe, and shovel. When gone bush, these are of equal—or greater—import than the kit to slide down.

Author’s note: save a pocket for a full flask. (summit is a fine setting for toasting)

The heritage of ski touring is literally pre-historic. Its earliest depictions are in cave art form. Now, as then, the base of a ski (or Split) is set with “Skin” before being strapped to the foot. The coarse material creates friction, enabling traction, and allowing reasonably safe passage through otherwise completely inaccessible terrain.

The Skin is later peeled as easily as it was applied and, minus its snow-magnetism, equipment is once again in slide formation.

Even the single-plankers have climbed aboard for this ride. The Splitboard, or Split, is a recent cousin to the touring family, melding traditional snowboard and ski forms while retaining iconic surf-meets-skate counter culture. And anyway, at altitude, there exists no animosity over vehicle.

There’s only the proof found in the pudding of use.

All the gear and best laid plans are prepared with single purpose; eventuality.

Leader among the list of backcountry happenstance is avalanche. It is a lurking predator which never sleeps.

Avalanche activity is the result of much more than snow alone. Contributing factors include moisture content, wind, slope gradient, direct sun, snowfall history and more. Stakes in this game are high. The most effective defense is a one-two combination of education with preparation. No amount of either is too great.

Final gear checks are complete. Jared starts the car. Mikey shuts the boot. The road to the pass waits.

In transit, the wondrous layout of Turnagain Pass rises in relief. It’s difficult to tear the eye from the windows. Ascents look approachable as a leisurely stroll or laborious climb, speedy skin or long-day hike. Journeys here take many forms.

In Alaska, routes of ascension are multi-use. Both the stout, post-holing bootpacker and the far more prevalent skinner are welcomed upon the trail. And all gather at Seward Highway’s roadside turnouts. From them, quiet trails depart to cross snowy drainages before rising into a quivering treeline. Climbs are gradual, airy, and well-marked. Typically, the passages will parallel flowing gorge water, barely visible through unbroken snow.

It’s an effort not to be frozen in place by the views.

Tracing near ridgelines or gazing back across valley floor is a stunning reaffirmation of the lore inherent to the Last Frontier.  The sloping topography is white-on-white. The air is knife’s edge cold.

Steady climbing cuts around and through quiet groves of wind-shielded pines. Nowhere else is an ecosystem like this to be found. Fat scoops of snow cling to skinny tree boughs, bending double their tops. It’s a landscape straight from the pages of Dr. Seuss, and ski-able.

Adrenaline is churning. Muscle power leaves the groves behind. Achieving a mid-height altitude, trees become scattered, vistas expanded, and options apparent. This is prime real estate for a snow pit.

Much like a wartime foxhole, snow pits are simple holes revealing vital data. Etched upon a pit wall are tails of layering, climatic conditions, and susceptibility to movement. The information gleaned from the simple act of shoveling snow has saved more than one life. And it’s an immutable facet of every backcountry trip.

Gullies unfurl below the still climbing party. They appear to the eye as side by side tree-runs leading to glory. Up slope, the treeless top reaches rise still further.

This juncture is a kind of mountain nexus. Days marked by passing weather, low-visibility, or suspect snowpack might direct the party downward, to return to the trees. The clustered trunks provide defilade and decrease likelihood of avalanche. Clear skies or adventurous hearts, on the other hand, urge the line chasers ever-higher toward pitched faces that hide in plain sight.

The sky is the limit in ski touring. Moving upward certainly affirms the notion.

Slope incline becomes steady and, if anything, increasing. Wind is now a factor, as is altitude. Summit access seems so close, yet there’s mighty hiking to be done.

Under-ridge bowls, more prominent than the summit itself, and locally anointed with wacky namesakes, are reached and surpassed. The previously gentle, cartoonish-ly pleasant topography of the lower mountain transforms into steeply angled faces. There is precious little comprise to the long, swooping snow lanes.

Panorama here is set to maximum exposure. The final steps, previously fretted to be impossible now lie behind as little more than footprints through deep snow. The achievement is a rush, but good sense prevails in imparting that welcome should not be overstayed.

In Alaska, weather (and light) shift surprisingly fast. “Avoid at all costs to be stuck in one, or lacking the other,” says Jared.

The elements demand respect, that above all. Yet even the gnarliest weather can feel calm during summit moments. Simple motions of gear adjustment, shift in balance, or even calm breathe transfuse to be stitches in time. It is the cool, still center to a land characterized by loud silence.

Thanks to planning, and a dash of good fortune, the downward zoom adheres to a pre-set path. Start, or ‘launch,’ is a location picked with care. The pre-determined line includes mid-mountain checkpoints. These act as muster stations for re-assessment of snow conditions or reassurance against the slow anguish of becoming lost. But it’s the spaces in-between that receive most lip-service, the surreal navigation; flow through a realm set to risk, and swooshing mute; a testament to the truth that in wild country, reward reflects effort.

At Turnagain egress takes unique form. Narrow, imaginative alleyways snake through close–and closing–trees. Ultimately they return to where the trail first began, but in-between there’s ample opportunity for deviation. Like it or not, day closes with just as much hiking as when it began. And the turnouts of Seward Highway are farther still. But, in the wake of a successful climb and ski, the lengthy exit stroll feels somehow like red carpet bled to white.

The day’s course has looped back upon itself and returned to its start; a place from which each ingredient has played a key role. Close friends have provided the company, knowledge plus skill have lit the way, and Alaska’s Turnagain Pass has laid the scene for a once in a lifetime experience attainable only along the Last Fr 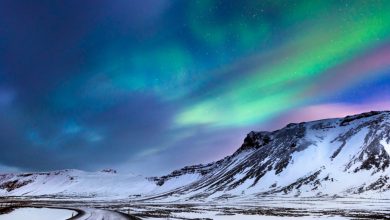 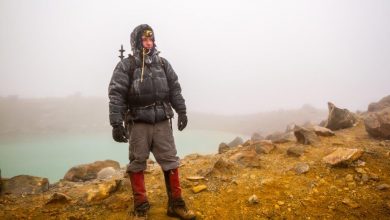 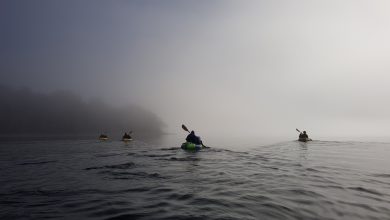 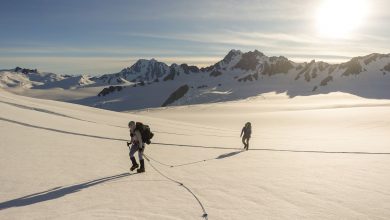