I can honestly say I have never been asked to leave a surf competition before! Sure, I have been yelled at and abused a bit, but I have never been given ten minutes in the bin! Looking back we possibly we should have seen it coming.

On the first day, we arrived at Teahupoo in Tahiti for the World Surf Leagues Championship Event – we should have got an inkling of what the next few days had in store. Teahupoo is a reef break, one of the biggest and heaviest waves in the world. Nestled at what is termed the ‘end of the road’ for a good reason – it is simply at the end of a long and winding road. This awe-inspiring coral reef not only creates phenomenal waves but also allows you to sit in a boat very close and watch.  Being able to get so close means that at times it can be a little chaotic, with boats jostling for position, all trying to be the closest, in the ‘right spot’. Normally if you arrive by boat, you wait in the channel for your turn, slowly moving into position and then you do your best to stay in ‘the spot’.

We met our captain Daniel on the wharf. He spoke very little English; we spoke very little French. Teahupoo is a small place, and there is kudos attached to being a captain and being able to take your boat out in such giant waves and putting your clients on ‘the spot’. Daniel comes from a long line of surfers, a giant of a man both in size and reputation, and we explained as best we could where we would like to be, he just smiled and nodded. As we approached the line-up of boats watching the surfing, he slowed, as you would expect, but then simply pushed his way to the front of the pack. We were feeling a little like we had just jumped the queue at the movies; I expressed my concern, but he just pointed at a small green flag flying from our boat and said “federation”, which meant a handful of boats had priority. Seemed entirely fair, as this was his job and we were his clients.

As the swell got bigger, so did the number of boats arriving to watch the event. However, this did not deter our captain in his never-ending effort to put us on ‘the spot’. Those around us seemed to accept we were there to do a job and whether it was the size of the small green flag or the size of the man behind the wheel all seemed to go reasonably well. As we concentrated on getting images of the surf, Daniel focused on seeing how close he could get to the breaking waves on the reef without killing us. Now there is a water patrol on duty at Teahupoo during the competition; they are there to make sure everyone is safe and that nobody gets too close to the reef or in any real danger. What started as a polite request from the water patrol escalated to yelling, finger-pointing and whistleblowing. Daniels reaction to these instructions was……. nothing, he smiled and continued doing exactly what he wanted. At one stage we made a loop to take a break (actually someone needed a wee stop), and as we pulled away into deeper water the gendarmerie (police) in a boat motored over to us and eights officers in uniform came over and spoke with the captain in French. (I should explain here that there is not a lot of love lost between the police, most of whom are from France, and the local Tahitians, it would be like our police force being all Australian!)

Someone translated the conversation.

“You need to obey the water patrol.”

To which the captain responded in Tahitian something along the lines of, “I don’t care”, but later it was explained that it involved a more local expletive than that. By the look of the French-speaking people on board our boat, we had a rough idea of what was being said! With that, we headed back to the edge of the reef; at this stage, the waves were the biggest of the week – predicted to be the biggest since 2014.  Now to be fair, the captain was very, very close to the reef, but when the largest set of the day arrived, he had few options. How it usually goes is when a big swell is coming, there are yells and blowing whistles and all the boats close to the reef head out to sea slowly, bobbing over the wave in an orderly fashion. Sounds simple, but it is not for the faint-hearted. Now as one of the biggest waves of the day approached, the yells started and whistles blew, but the boat in front of us did not know the rules and didn’t move and we were a lot closer to the reef than we should have been. With no forward escape, our experienced captain slowly moved the boat sideways over the almost breaking wave. Having a little experience of this, I knew the fundamental fact that ‘what goes up must come down’, I also remembered to get low in case we got launched, which we did. The prow of the boat went straight up in the air, we all lost our stomachs like going over a giant speed jump only to come down to people screaming and being surrounded by the water patrol who then ejected us from the game.

Basically, we were sent off for dangerous play. I am sure all was in control; however, I had my eyes shut for most of the experience so could not be sure! But unphased our captain simply did a circuit and basically came back to a slightly safer position.  With the help of a French-speaking local, we made it clear we did not want to go back on the inside and was quite happy just where we were. The captain sighed with real disappointment.

Now being expelled from the event (if only for a short while) was not the only dramatic moment over the three days. ‘Drama’ seemed to be the go to word. Pre the main surf event, the trials had been massive and added two more Tahitians to the competition, which made the event so much more exciting for the locals.

As the competition progressed, the excitement of the massive and dangerous surf was elevated by the shakeup on the 2019 Leader board with some of the biggest World Title threats bowing out of the event early while a new crop of hopefuls progressed.

Fresh off a win at J-Bay event, Gabriel Medina arrived at Teahupoo placed seventh in the world title race. The exciting goofy-footer prepared for his heat by watching every surfer who sits above him on the rankings fail in Teahupoo’ s thundering surf. Brimming with confidence, Medina went on to take out his Round of 32 heat over Ezekiel Lau (HAW) but left his best performance, and that of the contest, for his Round of 16 wins where he posted a near-perfect heat total of 19.23 from only two waves against Griffin Colapinto. This score included a perfect 10.00-point ride, the first of the 2019 men’s season.

“That was a nice heat,” Medina said. “I feel blessed to share waves like that with Griffin (Colapinto), and it felt so good to get a nine and a ten. I’ve been waiting for this moment for the first half of the year — I love this contest, especially when the waves are like this — this is what I live for, going left and getting barrelled.’ 2015 champion Adriano de Souza (BRA) only recently returned to competition after a year off with a career-threatening knee injury. The tour veteran has been struggling to find the form and consistency he is known for in 2019, but in seriously critical big surf, de Souza put to bed any question that he’s past his best, taking down countryman Italo Ferreira (BRA) in one of the heats of the year with de Souza’s 17.87 two-wave including the most significant ridden wave of the day. He then booked himself a spot in the Quarterfinal with a dominant win over Frenchman Joan Duru (FRA) with another first heat total, this time 17.50.

Somewhat sadly, current leader Kolohe Andino (USA) took a blow to his tilt at the World Title, going down to 17-year-old Tahitian wildcard Kauli Vaast (FRA). Andino as he does, controlled the heat in its entirety until the final minutes, with the crowd screaming the local youngster swung on an inside slab and pulled in to take the lead and the win. Vaast was eventually eliminated by his hero and friend Jeremy Flores (FRA), while Andino leaves Tahiti with his worst result of the season.

11-time World Champion Kelly Slater (USA) had a massive opportunity to boost up the rankings at one of his pet events in flawless barrels — which are his speciality. Unfortunately for the 47-year-old, his event came to an end at the hands of the young gun Jack Freestone (AUS), dashing Slater of the chance to record a sixth event win in Tahiti.

“I’m upset, but that’s just how it goes,” Slater said. “Last time I surfed against Jack, it was big like this at Margaret River and I kind of ‘frothed out’ and caught lots of waves while he was smart and got the better ones. I had my chance twice, but it just didn’t go my way. I think this result will take me out of the picture as there aren’t enough points out there to get me in the hunt for the World Title comes Pipeline, but stranger things have happened. There has been a lot of upsets today, but it will be tough for me now for the rest of this year — especially after that heat.” Owen Wright’s trademark of poise in the tube earned him an 18.50 heat total and a spot into the Quarterfinals while his opponent and local Tahitian superhero Michel Bourez (FRA) who was narrowly pipped at the post.

“That was a very special heat to have Michel (Bourez) here in Tahiti and go wave for wave with him the entire time — it felt like a special heat going down” “I was up at 3:00 am this morning just thinking about what today would bring so I’m sure I’ll struggle tonight to sleep after an amazing day. This place is so beautiful and gives us so much good energy, especially when we’ve got waves like this.”

The finals day held all the drama and excitement of a scripted adventure movie, local guys piped at the post, big names crashing out then the two team members, friends, yet arch-rivals went head to head; the flare, cockiness and brutal strength of Medina versus the almost ballet composure of Owen Wright. Trading wave after wave in massive sets the calm demeanour and determination to win pushed Owen right to the winners’ platform!  He humbly accepted the win in tears raised his winning boarded aloft to the cheers of the watery arena (the next day is proposed to his long-time partner – big week for Owen)

The real winner here (apart from Owen holding the trophy aloft and getting a new wife) was surfing and particularly surfing in Tahiti.

Three days before the mega final we were photographing a 7-year-old girl being pushed into Teahupoo waves by her dad, to be followed by a medium swell which created an acrobatic playground that the pros went nuts in. Then the main competition and finals day where the waves were either amazing or your worst nightmare depending on how you looked at it. 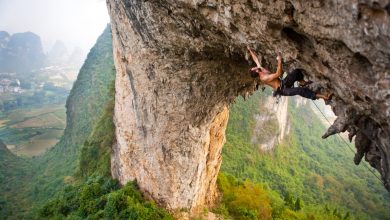 Is there any point to rock climbing? 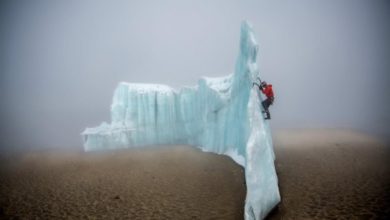 Ice Climbing On The Roof of Africa 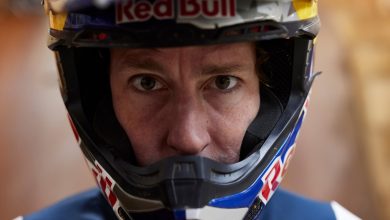 The extreme maverick on home life, stunts and what’s next in his career. 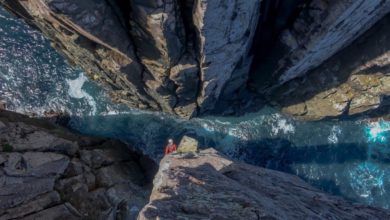