For the average person, a big wave could easily be hel”l.

There are giants out there on the sea. They rise toward land and make war on our shores with the full rage and ferocity of the ocean.

But among us are warriors brave enough to find, contest and tame them.

This is big wave surfing. And there is a hardcore tribe of men and women that chase these monsters around the world.

For a wave to be seen in the category of ‘BIG’, it should be bigger than at least 20 feet high (over 6 meters). A wave that size can create speeds of up to 80km, and the inevitable wipeouts, when things don’t go to plan, can have enormous consequences. Many lives have been taken in this sport, but big wave surfing has not only surged in popularity it has now become a major international competition in its own right for both men and women.

The combination of weather patterns, coastal terrain and wind conditions keep this group of surfers pinned to forecasts all year round. They will travel the world to pick up that epic swell in places like California, Tahiti, Fiji, Portugal and Hawaii to mention a few.

Of recent years Portugal has become the epicentre of big wave surfing. Distinguished by its now-iconic lighthouse, Nazaré is home to a frightening wave, Praia do Norte, which can push the 100-foot mark.

The Nazaré Canyon is an undersea ravine just off the coast, which is said to be the largest in Europe at a depth of over 5,000 metres and 230 kilometres long. The power of the ocean is channelled to the land like a funnel; the waves then dump themselves onto Nazaré’s shores; no words can describe the power and size; it looks like a cartoon. Images tell the best story.

In a similar region in the cold waters where France meets Spain, you’ll find monstrous waves at Belharra. Unlike many waves that tube or barrel, like Teahupoo and Jaws, Belharra is just a menacing 50-80 ft avalanche of water in the middle of nowhere. It’s dark and foreboding and has huge consequences if you fall.

Playa Zicatela in Mexico, better known as Puerto Escondido, is popular at about four to six-foot, for the above-average surfer to catch a few waves and be able to boast that they surfed what is known as the Mexican Pipe. Yet each season brings massive swells to the exposed coast that explode as big as 40fty foot and although not as big as some other location. But due to how shallow it is and the power at which the wave impacts there are not a lot who can say they tamed  XXL Puerto. It is also renowned for some of the worst wipeouts in the world.

Locally in the South Pacific, we have Cloudbreak in Fiji, with its blue water and sunny skies it can be a tempting mistress. However, it too packs a nasty punch, and it has in recent years been the scene of some fantastic contests and due to its locality, it is a real swell magnet. But the consequences of fall is not kind, there is no soft sand just knifelike living coral.

Tahiti’s Teahupoo, aptly named ‘the end of the road’ has been the location for some of the most incredible big waves in the world. Due to the configuration of the coral reef, Teahupoo creates a massive slab of water that breaks, barrels and creates a pit like no other. It is as if the whole sea has simply dropped down a giant step.

New Zealand is not renowned for huge waves, but from time to time they arrive in places like; Foveaux Strait’s Rarotoka island, few secret offshore reefs in the far North. Possible the most well-known is the South Island’s Papatowai—respectfully, almost affectionately, known as Papas. There is a core on New Zealanders dedicated to chasing big New Zealand swell.

The development of big waves surfing had a big push when surfers saw that you could get towed into these giants waves rather than just paddle. Plus the fact that the jet-ski could also come and save you if things did not go well. This created a period of innovation, boards, sledges, buoyancy vest etc. that seemed to make it slightly safer.

While the tow in group continued to grow, a hardcore tribe of surfers, often thought of as purists would only paddle. This paddle aspect of big wave surfing has in the last few years gained real popularity and has also now acquired its own competition.

For the non-surfer wipeouts look horrific, and at times they are, but the main risks are ‘hold-downs’. Two and three-wave hold downs are common, where you get caught inside and have to wear colossal breaking waves on the head.  A big wave can push surfers 20 to 50 feet below the surface, which creates pressure on the lungs, not to mention being ‘rag-dolled’ at the same time. What does this mean? Take a rag doll and shake – that is what happens to a surfer. Also, when you get driven down eventually, you have the risk of hitting the bottom, and this has caused the death of several famous big wave surfers.

Preparation for this situation has now become quite technical with courses where you can learn both to cope with the impact and also how to hold your breath for longer. A common way to train is by running underwater while holding a big rock. Also, they use yoga technics to calm the panic of being held down and keep super fit.

Lastly and it kinda goes without saying – don’t try this at home. These surfers have dedicated their lives to riding big wave, and it is a slow process of training, skill, a certain amount of madness mixed with passion and huge balls.

Best viewed from far with awe! 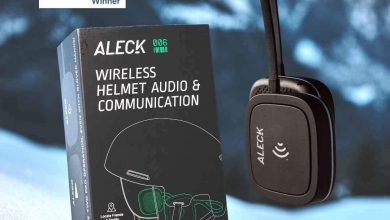 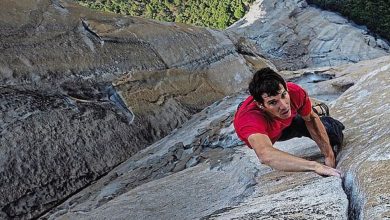 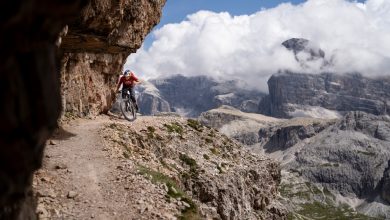 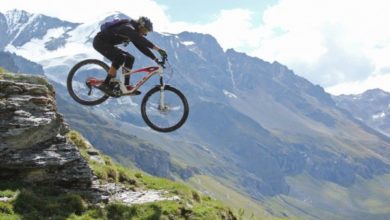 There’s something special about the Alps…